This is one of the most popular hiking trails in the Catskills. This route to Giant Ledge is a short moderate hike with a huge pay-off: a series of open ledge views which are spectacular in all seasons. From there, it’s only 45 minutes to Panther’s rich pine-filled summit — and one more spectacular view.

For the return journey, I added a bushwhack along the bottom of Giant Ledge, where the terrain is untrailed, unspoiled and unearthly.

In summer, even mid-week, the small lot on Route 47 fills up very quickly. On weekends, plan to arrive as early as you can — and have a Plan B for your day in case the lot is full when you arrive.

The trailhead is uphill across the road, right in the crook of the hairpin turn. For 30 minutes or so, follow the yellow blazes of the Phoenicia East Branch trail.

Early on, this footbridge crosses the Esopus Creek which begins further upstream on the north side of Slide Mountain.

View from the Esopus Creek footbridge…

From here, the trail is steep and lumpy until you make it to the junction.

After 25 mins or so you’ll arrive at a junction. Turn left/north to head toward Giant Ledge, following the blue blazes.

Just below the 3000’ contour, a spur trail leads left/west to a spring. Two minutes after the spur, you’ll come to a boulder field. Pick your way through, making your way toward an enormous Tim Burton Tree.

Turn left and head uphill, continuing to follow the blue blazes (which can be tricky to spot here).

In no time, you’ll make your way to the long straight ridge of Giant Ledge.

Giant Ledge is an enormous structure, visible as a distinct ridge to the south of Panther’s summit from many vantage points around the Catskill Park.

The first ledge is the largest and offers the best view…

Beware the chipmunks. They are beyond tame. They will stare you down.

Several primitive campsites are close by, down a muddy herd path on the west side of the trail.

Walk Giant Ledge’s full length and visit each of its lookouts. There are five, maybe six? I always lose count. Views from each offer an ever-changing angle on Woodland Valley below, the Eastern Devil’s Path mountains and the Burroughs Range.

From here, most people return to the parking area on Route 47.

If you have it in you, the trek to Panther only takes an additional 45 minutes, adding 90 minutes to your total hike time.

From Giant Ledge, the trail descends into the col between the two peaks. You lose about 150’ elevation which isn’t much, and the trail is lovely.

Heading up Panther’s southern ridge is not difficult. The trail winds pleasantly through hobblebush stands and rock outcroppings…

Pass this rock pile on your right. It’s not the summit but, if you’re feeling adventurous, you can climb the boulders for a good view.

The summit is not long after the boulder pile.

A small flat ledge marks the summit. There’s a tree with exposed roots on the ledge, and sometimes there’s a small cairn.

You’ve summited Panther, yes — but an even better view lies just ahead.

Less than five minutes from the summit is a larger ledge with a much grander view. This is the best place to lunch, looking down across Phoenicia to the Devil’s Path. Straight ahead is the Eastern Devil’s Path. Look left to see North Dome and Mount Sherrill. Meanwhile, on your right, you can see Mount Pleasant, and you can just make out Ticetonyk guarding the Ashokan Reservoir.

On particularly hot days, if you want a break from the sun’s rays, look for a herd path leading into the pine woods. It’s much cooler in there. There are several flat, mossy spots where you can sit for a while and cool off.

From here, you can return directly to the parking area along the trailed route in about 95 minutes.

On my way out, in the col between Panther and Giant Ledge, I diverted to a bushwhack along the base of the cliffs. Not many people take this route. The terrain is tricky and tiring.

Warning! The hike to Panther and back is a moderate hike. This bushwhack section is rated difficult. Before attempting it, you should have completed many bushwhacks and be totally confident in your abilities.

Start anywhere in the col. I took this flat boulder just above the 3000’ contour as my jumping-off point and turned east/left into the open woods.

The terrain is a little steeper than you might think from looking at the contour maps. If I’d started a little further north on the trail, I might have avoided some of the steepness. I felt uneasy so I descended to 2850 and found myself in this glade…

From here, I headed south. My objective for the day was to do a short bushwhack in new terrain without getting into any trouble. On this first pass, I kept away from the long line of enormous boulders strewn at the bottom of the cliff. It looked like tough, slow work — and after April I was nervous about finding a nest of rattlesnakes in there. So my route tracks a little to the east of all the high drama.

I came across this big crop of Apioperdon pyriforme or stump-puffball, which is an edible. Personally, I’m too scared to eat anything I find in the woods — and there are similar looking mushrooms which are not good to eat.

This bushwhack is only a mile or so, but it took an hour. It was very demanding. I hear there are caves to explore at the base of the cliffs so my plan is to re-do this route in late-autumn/early winter, when it’s much cooler.

As it was, the deep duff, which regularly collapsed underfoot into ankle-twisting holes, was enough to contend with. Frankly, a foot of snow would make the trek much easier.

But the landscape is a fantasy-land mix of old blowdown and giant boulders, with everything covered in moss. Lots of good bushwhacking down here, even on this “easier” route.

Back on the main Giant Ledge/Panther trail (blue blazes), I turned left and headed down what now felt like exceptionally lumpy trail-bed.

Hiking to Panther from Route 47 is not the world’s toughest hike. But the bushwhack section wore me out. On the trail down my feet felt pummeled and, by the time I made it back to the lot, my legs were jelly.

This is a very popular and exceptionally scenic hike, that contains an optional bushwhack section. The first part of the hike (to Giant Ledge) is rugged but short and travelled regularly by children and dogs, so that section seems to be kid-friendly.

The parent mountain for this hike is Panther.

Smaller lot. VERY busy. This lot serves one of the most popular hiking trails in the Catskills. Arrive as early as you can.

Disclosure: Links to external product pages and websites on this page may be affiliate links. This means, at no additional cost to you, I will earn a commission if you click through and make a purchase.

Snow
Upper elevations have deep wind-blown drifts and broken-out trails may be refilled. Allow extra time for your planned route. Use snowshoes; don’t be a posthole.

Wind Chill Alert
Wind chills below 0°F (-18°C) on the way. Beware of frostbite and hypothermia. Read How Cold is Too Cold To Hike? Read How Windy is Too Windy To Hike?

Ice Alert
Ice at all elevations. Pack microspikes until June. Crampons may be advisable in spots.

Winter Gear
Survive and thrive on the hills this winter. Review your winter hiking gear and grab this free winter hiking cheat sheet.

Closure
The steep eastern side of Platte Clove Road is closed for the season. Here’s your alternate route to Platte Clove.

If you enjoy this content, you can support my writing with an instant micro-donation.

A portion of your support goes to NY-NJ Trail Conference and local Catskills hiking organizations.

These are the best hiking apps I’ve come across to date. I‘ve tested a bunch of apps and stopped using a lot of them. These are the apps I use over and over. They make my hiking life richer, safer, and much more enjoyable. 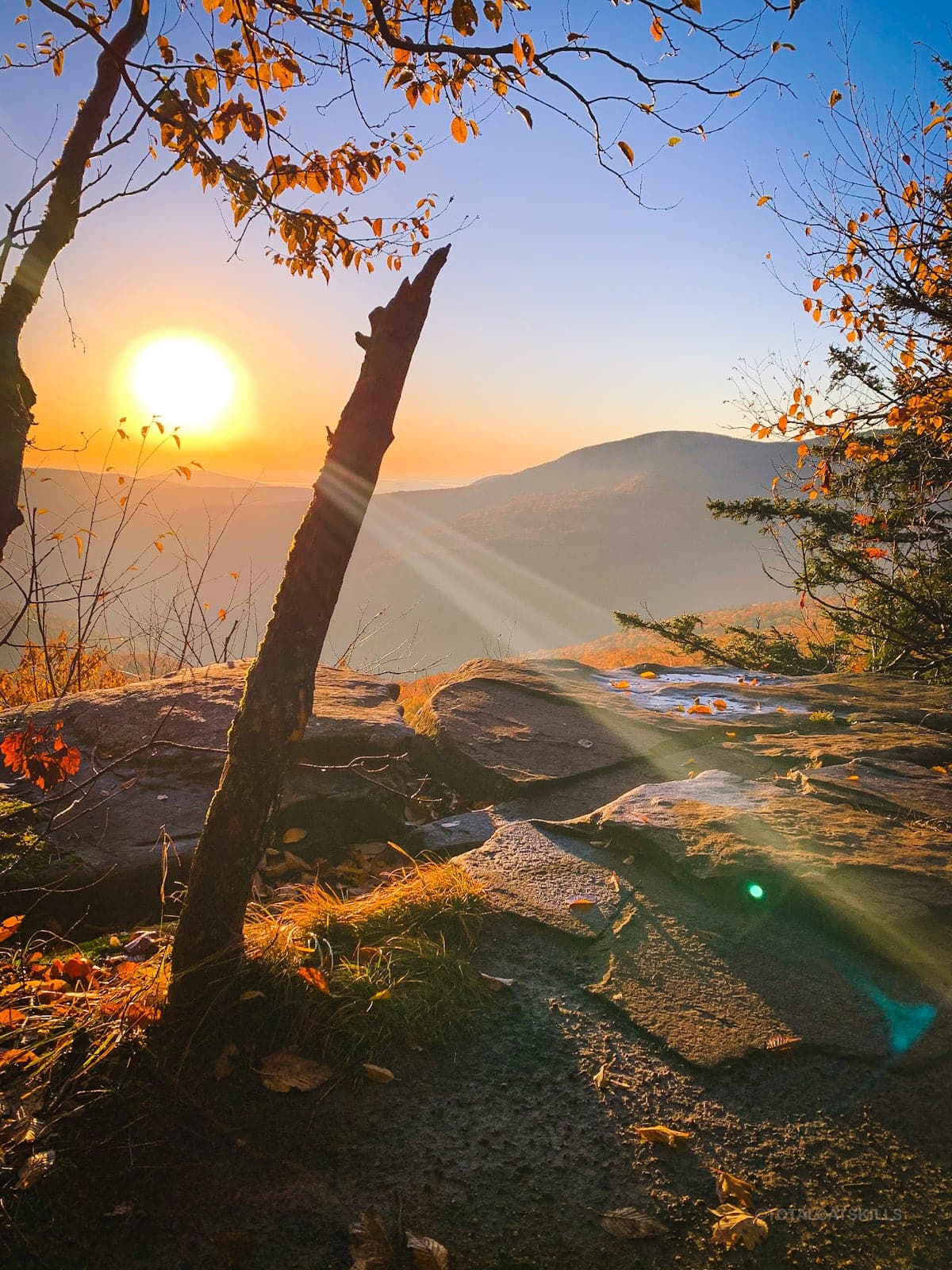 Grab this while you can… 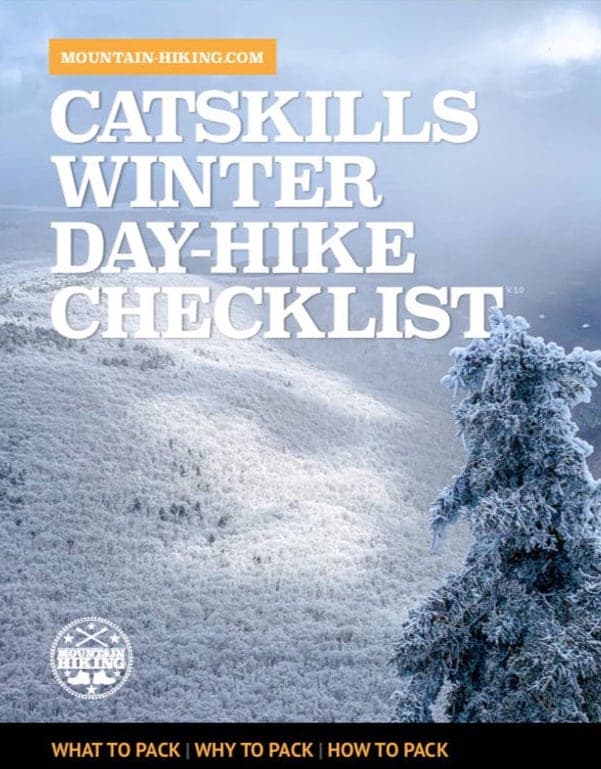