Ice Alert
This week will bring overnight freezes at higher elevations. Pack your microspikes until June.

Hunting Season
It’s hunting season so wear lots of orange on hikes, especially if you’re bushwhacking. Keep your dog brightly-colored too, and on leash at all times.

Closures
Graham and Doubletop mountains are closed to hikers from Nov 8 to Dec 26. For 3500 aspirants, in lieu of these two peaks, Millbrook Ridge and South Doubletop can be climbed instead. See this access update.

New York is currently open for dining, but there are restrictions. Check ahead to make sure your favorite place is open at the time you need. Practice social distancing. Wear a mask.

Out-and-back, with steep but non-technical trail.

Above Route 23, the Long Path follows the Catskill Escarpment north over Ginseng Mountain and Mount Hayden toward Mount Pisgah, Richmond, Ashland Pinnacle, and Huntersfield. The smaller scale of these northern Catskills means there are no High Peaks vibes — little to no boreal summits — though the mountains are beautiful and exceptionally quiet. These are great trails to hike if you need some solitude.

Michael Kudish says that Ginseng and Hayden have been extensively cut, but not burned. The trees here are all second growth forest — meaning they are forest that has bounced back after previously being cleared of old, original growth — which is true of most of the forest in the Catskills.

The land up here was used for pasture and logging, and the mountains are covered in old logging trails; the trail over Ginseng and Hayden runs along, and crosses, many logging trails.

The drive along Route 23 from I-87’s Exit 21 is a new favorite of mine. The road winds along the Escarpment peaks, eventually passing right through them, and is very scenic.

In Durso Corner, a spot on the right side of the road called The Five State Lookout is worth pulling into.

I believe the mountains visible to the east (back down Rte 23) are the Taconics.

I thought my phone would direct me first to the Elm Ridge parking area for Windham High Peak, and then head north, but it had me turn off Rte 23 sooner, at Old Road, which connects directly with Jennie’s Notch Road from the east.

Jennie’s Notch Road is a gravel road, very picturesque. It terminates at a pretty house on the right. Do not park here; it’s private property. Instead, continue up a short dirt road, just 200’ or so, until you see the iron gate below, and park in the small area to its left.

This route is blazed with aqua paint which, unlike the disc blazes in the rest of Catskill Park, is not reflective at night.

There are no grand views on this route. Everything is small scale and modest — even the steep sections which are very steep but thankfully short.

A scenic view is marked just south of Barlow Notch, but I didn’t notice anything as I hiked. It may be a little off trail, or that view may open up when the leaves are off the trees. (Lake Heloise is to the southwest.)

The first part of the trail follows the route of an old 19th century mountain turnpike gently uphill toward Jennie Notch. A very detailed description of this trail section can be found on this Trail Conference page for Section 26 of the Long Path.

Currently, the gate near the north end of this section is knocked over.

Soon enough, you pop up into Jennie Notch.

Jennie Notch is a small wooded col between Ginseng mountain to the west and Mount Zoar to the east. Keep an eye out for these dual aqua blazes indicating a sharp turn left…

Right after Jennie Notch is an exceptionally steep section of old logging road. A real huffer. There are several such sections on this route, but this is the steepest; I think it might be the very steepest grade I’ve hiked.

You’ll pass at least one side trail, which you can ignore.

The trail does not pass directly over the actual summit of Ginseng. But the summit is a very short bushwhack from the trail. As it happened, I wandered off trail unconsciously and found myself wading through the fern grove next to the summit, following in the tracks of someone who had previously made the same mistake.

The summit is marked with a low round cairn…

The fern glade is south of the summit, right next to it. It’s large enough to be visible on satellite imagery.

…before eventually reconnecting with the Long Path. On the way down, I passed this magnificent Bear’s Tooth Head mushroom (which I regret not harvesting)…

Back on the trail, at 2840 ft, I came to the only rugged part of this hike. It’s very short and barely worth mentioning — it only stands out because the rest of the trail is so easy-going.

I thought things might be about to kick up a notch. No. The trail reverts to easy, pleasant hiking through some lovely grassy woodland…

Barlow Notch is the col between Ginseng and Hayden. It’s notably sweet and is the site of a memorial plaque.

I don’t know anything about this person, but there is a Sutton Road nearby and I’ve been told there is a history of Suttons in the area.

The plaque is down off a flat section of trail which confused me twice. It’s an old road, so flat and clear I just zoned out while walking it. I found myself walking past the following turn, which is marked with a small cairn. I continued on down the road for 1000’ or so until I realized I’d lost too much elevation, doubled back, and reconnected with the correct trail.

Later, on my way back out, I again missed a turn here, this time the turn-off to start heading back up Ginseng. It took me a minute to realize and to reconnect with the Long Path — a reminder that there are no trail signs on this trail, only painted blazes and a few genuinely helpful cairns.

Anyway, right after Barlow Notch, there’s a short, steep climb to the summit that includes this fern goodness…

And somewhere along the way, this classic Catskills erratic makes an appearance…

The trail up Mount Hayden is once again all-deciduous, with beautiful patches of fern to walk through…

This summit is about as unremarkable as it gets. The modest knob is a short distance off trail, is dominated by a maple tree with fern and brambles all around. There are no views.

I sat on an old trunk close by, ate lunch, and harvested 1 lb (450g) of delicious Chicken of the Woods.

My original plan was to go on to Mount Pisgah but, between the steep sections and the wind/rain, I wasn’t feeling it. I decided to turn back and made a plan to hike Pisgah and Richmond together another time.

From the summit of Hayden back to my car, with no wrong turns, it took about 1h 50m.

Heading back down, I came across this tiny stand of bright red Wax Cap mushrooms.

Somehow, I’ve never seen these guys in real life — until this day, when I saw about 500 on Ginseng Mountain; well, there were so many, at least, that I had to watch where I walked. The rain brings salamanders out in numbers.

Eastern Newts can live 12-15 years in the wild. These are efts — the stage between larva and adult; this stage ends when the newts are 2-3 years old.

They are easy to catch, and don’t seem too freaked out to be held gently for a minute — but I’ve since learned this isn’t a great idea. They are mildly toxic. It’s not usually a problem but you wouldn’t want to get any secretions from them in your eye. More importantly, handling newts damages their protective mucous covering which leaves them vulnerable to pathogens. Hudson Valley One has a short, informative article on Red Efts. So this is a picture of me doing something I won’t be doing again…

The most comparable mountain hike I’ve done is over Ashland Pinnacle and Huntersfield; the terrain and hiking there and here is very similar.

This is a moderate hike. If you like steep routes, this hike has several short steep sections. It’s great for solitude.

If you do this hike, let me know how it goes in the comments below…

Description: Very small. 3-4 cars tops. Do not park by the house. You must drive up the short dirt road to the gate.

Location: The map below shows the exact topographic location of the trailhead.

Spotty but I was able to get texts out from several points, including the trailhead. (My network is Verizon. YMMV.) 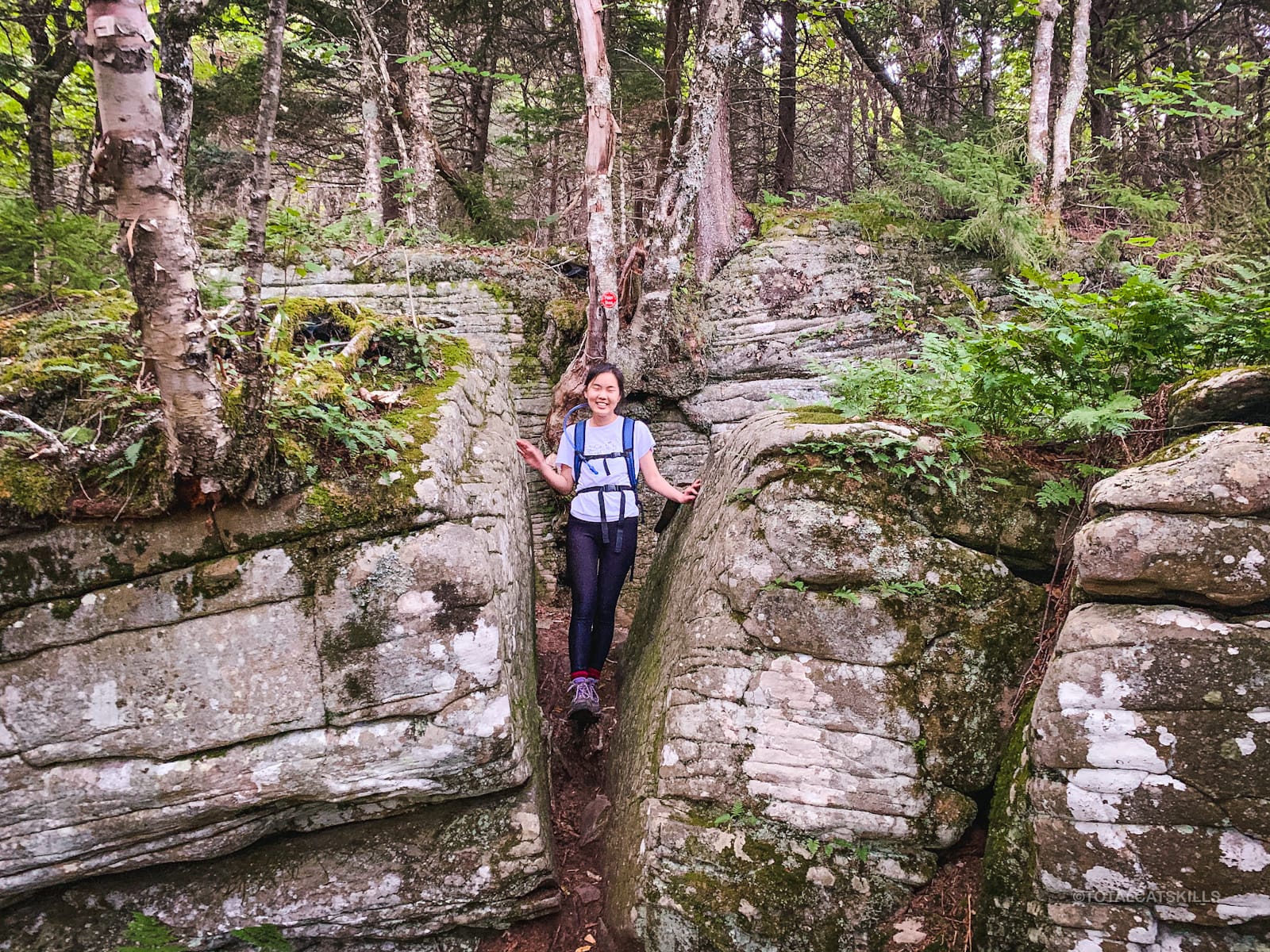