Watch out for the tricky dim trails which will lead you astray. Stick to the blazed trails. Avoid the rattlesnakes.

For such a short route this has to be, mile-for-mile, one of the most scenic hiking trails I’ve hiked in lower New York. We don’t get many scenic vistas in the Catskills. This route is loaded with them. It’s truly ridiculous, especially around sunset.

The first mile is very steep, and has a short but tricky section to climb. Without that section, the hike is rated moderate, maybe even easy. But that first mile adds real challenge, and is potentially dangerous, so I rate the hike difficult.

The parking lot for this trailhead is tiny, little more that a dirt patch by the side of the road, with enough space for 3-4 cars.

You’ll see a strange red-brick building in a field surrounded by fencing. The building has been described to me as an unfinished mansion and, apparently, it’s been dormant and creepy for years. (If you know anything about it, let me know below in the comments — which are now working.)

BTW, I always pack this power brick in my main backpack. It’s small but it recharges my phone 2-3 times. Great peace of mind on the trail.

The initial section, which runs alongside the creepy red-bricked mansion’s fencing, is a short segment of flat grassy trail.

I love these quartz inclusions, so common in the Taconics…

Around 1500’ you’ll hear the cascade’s waterfall which pours down a sheer cliff. This is the view from the bottom:

You can see from this second photo, which was taken near the top of the Cascade, how steep the terrain is.

Right by the top of the waterfall is a short, difficult and dangerous section of open rock face. It’s not vertical, but it feels close-to-vertical. The first time I did it, the rock was wet and I opted to take an alternate herd path I spotted. The second time I climbed it, the rocks was bone dry and I felt comfortable enough to follow the yellow blazes; but only just.

Rock climbers may scoff, but regular hikers should be prepared to unnerved. At the very least, you’ll need a steady head and quality hiking shoes/boots with excellent grip.

Wayfinding Above The Cascade

Above the waterfall, the route marking is a mix of round discs pegged to trees and daubs of paint on the open rock face. Keep an eye out for both as it switches back and forth, and there are several sharp switchbacks to navigate.

Finally, after much longer than you’ve ever taken to hike ¾ of a mile, you’ll come to this sign at the top of the yellow trail.

From here, the rest of the hike is easy/moderate.

Turn left and make your way along the trail through the woods and mountain laurel. There are one or two easy brook crossings. Follow the white blazes of the South Taconic trail.

Down to your left, the valley views start to open up…

Ledges and open spots along the way give you views of Ashokan High Point and the Catskill escarpment.

The trail switches back and forth between wooded sections, thick stands of mountain laurel, and open areas with rocky footing like this…

After a moderate climb, just below the summit, turn around and take in the first of many excellent views. To the south you’ll see Riga Lake, foreshortened and shaped like a heart, with South Pond peeking out from behind. You are looking southeast across Connecticut.

From here, the final push to the summit is very short.

South Brace’s summit is marked with a large cairn. I don’t think it’s the actual summit. The ground seems to rise a little more to the northeast. On my GPS track you can see I poked around off-trail for a bit until I found a spot that felt right.

The trail continues down and winds around South Brace, into a small col, before climbing gently to the open summit of Brace Mountain. From South Brace to Brace takes only 10-15 minutes.

Brace’s summit is a wide grassy knoll. Although only 2311’ high, Brace offers spectacular 360° views of the surrounding land, including as far north as Mount Greylock, 44 miles distant.

I didn’t spend long here at first. My plan was to get back to the summit for sunset. But I popped off a few shots and they’ll give you a sense of the scenery available.

More from this summit later.

From Brace’ summit, I mistakenly followed an old dim trail directly north and ended up having to bushwhack 100 ft west, through thick underbrush, to get back on the blazed trail.

The correct route is along an old road, now grassy…

The crossroads below is not marked on the NYNJTC map, and Gaia App shows three trails converging, not a crossroads. It’s not obvious what to do, but turn left here and watch for a few white blazes affixed to trees.

Eventually, you’ll pass this weathered sign (there’s an overlook nearby) and, right after it, you’ll turn right/east.

Look for this sign indicating Mount Frissell at 0.8 miles.

Begin following the red blazes. The trail winds through a very thick stand of mountain laurel that’s teeming with life. I heard many critters moving around on either side of the trail.

The blazing is not always clear and, when it is, it seems to suggest you may now be in a horror movie…

Skip right past this sign for the Ashley Hill trail and continue along the Mt. Frissell Trail.

Very soon, you come to the state boundary between New York and Massachusetts which is marked by a small obelisk.

From here, as you follow the trail to the next waypoint, you’ll wander back and forth over the border between Massachusetts and Connecticut.

The trail rises over classic Taconic rocky footing as it bends around Mt. Frissell’s southern side.

You quickly come to another cairn. This one marks the highest point in Connecticut. There’s an official marker thing-a-ma-jig cemented into the ground, and a register you can sign inside an ammo box.

From the cairn, you can look back and see the two Braces and Riga Lake. But keep going. Just ahead, there’s a better view.

About 150’ after the cairn, turn around. This is the view you’ll see…

From here, the trail turns abruptly north and heads directly up to Frissell’s summit which is wooded and charming but offers no views. Another register is tucked inside another ammo box.

My maps showed another scenic view not far beyond Mount Frissell’s summit, so I went and checked it out. It’s a small ledge with a good view of Round Mountain to the east and Mount Ashley to the north.

Back to Brace: Sunset

The hike back to Brace was very easy. It took only 30 minutes. And I timed it just right for sundown.

To the southwest, down in the valley, the largest mountain is Stissing. A short steep climb up Stissing’s north side brings you to a fire tower with excellent views of the Catskill and Taconic escarpments.

At sunset, the summit of Brace Mountain is magical and otherworldly. The rolling hills — drumlins? — in the valley catch the warm, slanted rays of the sun, bringing the whole landscape to life.

A descent via this route after dark requires a headlamp. A hand-held flashlight or phone light would cause additional safety issues; you will definitely need both hands free.

I hiked toward South Brace…

…passed over its summit, then down past the view of Riga Lake and out through the woods to the edge of the Taconic ridge. These last sunset views of the Catskills were so great to see.

Doing the sketchy bit by The Cascade in the dark was… definitely something. From there, the route down is still steep, but is manageable with good concentration and full batteries. Note: unlike in the Catskills, the blazes in the Taconics are non-reflective and do not glow brightly when lit by headlamps. Make sure you have spare batteries in your backpack.

I try to keep the number of images per post below 15. But it was a struggle to cut down the image count for this post. In the end I think I capped it… around 40? Crazy. I highly recommend this hike.

This hike is insanely scenic.

This particular route is not a kid-friendly hike but routes from the north are less risky; I have yet to hike them.

There are several other routes up to Brace, Alander and Frissell. I can’t wait to explore them all.

The parent mountain for this hike is Brace.

If you do this hike, let me know how it went in the comments below. Your feedback makes this site better.

Pretty good but some dead spots. This part of the Taconics has good cell service as long as you’re on the ridge that faces west toward the Catskills. My network is Verizon. YMMV.

This is a great read… 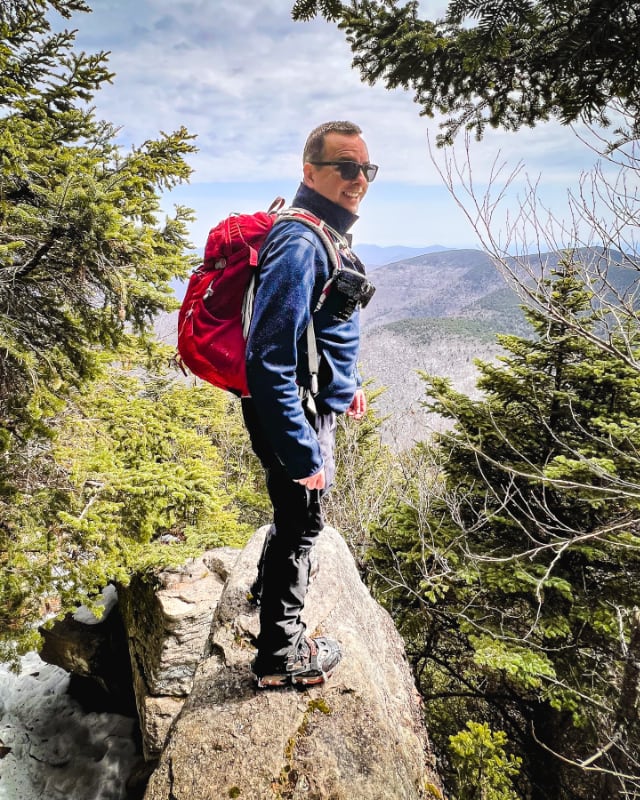